Stigma represents one of the biggest barriers to living with dignity following a dementia diagnosis. According to the Alzheimer Society of Canada, almost half of Canadians would not want others to know if they have dementia for fear of stigmatization — as a consequence, many individuals experience social isolation.

Why is this of concern? Social isolation is linked to elevated stress hormones and inflammation, poor sleep hygiene, and immunosuppression —well-known risk factors for numerous diseases (e.g., vascular disease, Alzheimer Disease) and death. Research findings indicate that social isolation poses a health risk comparable to being sedentary or smoking 15 cigarettes per day.

How can social singing counteract these risks? Music in general and social singing in particular is known to diminish levels of perceived stress, as well as facilitate better regulation of cortisol (a stress hormone). Similarly, levels of oxytocin – often referred to as the “cuddle chemical” – is a neuronal signaling molecule linked to the promotion of bonding and trust between individuals, as well as the reduction of stress. Recent findings have shown that oxytocin levels can double when singing together in a group, in contrast to singing on one’s own (Keeler et al., 2015). Overall, social singing is linked to a number of health advantages including social bonding with others, happiness, diminished stress, better immune function, and better sleep. In keeping with these findings, Voices in Motion is a success due to the social integration, the community engagement, and the movement itself. 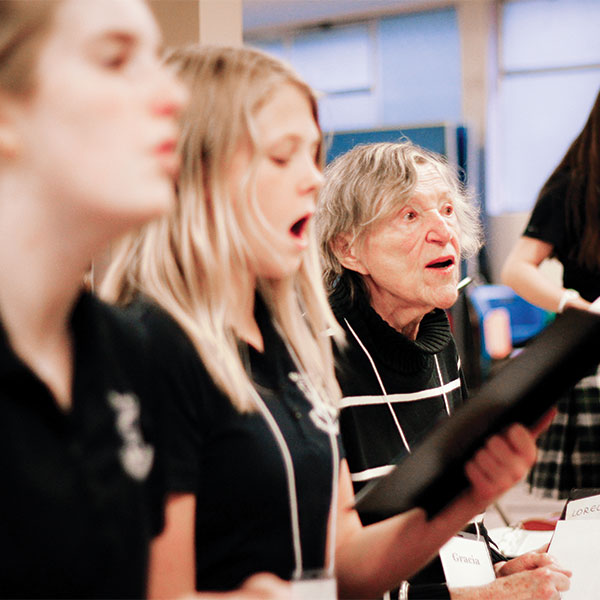 Virtually every behaviour that we engage in requires multiple neural circuits in the brain – this is most certainly true of music and singing. In its earliest stages, Alzheimer’s Disease typically damages a region of the brain called the entorhinal cortex, and a specific structure called the hippocampus. The magic of music, particularly the singing of songs that an individual with dementia has known for many years, is that that activity draws upon intact (as opposed to impaired) regions of the brain. Specifically, social singing draws upon emotional and procedural brain systems unaffected by dementia. Those with the disease participate in choir to the same degree as any other individual—a critical consideration for increasing social contact and reducing stigma, as well as for maximizing agency and providing a validating experience for individuals living with dementia.

Participation in the choir (group singing) in comparison to solo singing resulted in pronounced differences in brain activation:

Increased Oxygenation of the frontal cortex of the brain was measured for the solo versus social singing condition. Increased oxygenation/activation was observed while singing alone, which likely reflects both increased novelty as well as stress (as all previous rehearsals required group singing). In contrast, during choral (group) singing, the reduced levels of activation for this same brain region likely reflects reliance on other brain systems (emotional, procedural) to successfully participate in choir. Why do these differences matter? Notably, the frontal cortex is one of the regions of the brain known to deteriorate with dementia; accordingly, devising activities (such as singing well-known songs with a group) that minimize recruitment of such brain regions with enhance successful participation for those with dementia.

Social singing elicits neurochemical brain changesthat enhance contact, coordination and cooperation with others. Neurochemicals like dopamine, serotonin, and norepinephrine are crucial for mood stabilization. They are not found in the same regions of the brain nor in abundance in the brains of those suffering from depression.

Music is a super-stimulus, drawing upon many brain systems unaffected by dementia, that permits those with the disease to participate in choir to the same degree as any other individual (a critical consideration for increasing social contact and reducing stigma).

Findings from the Voices in Motion choir have helped to underscore that engaging in a lifestyle intervention like social singing can improve many facets of function – psychological, social, neural, and even cognitive. Cognition – borrowed from the Latin term for “to know” — is characterized by many abilities including memory, attention, and language. A key focus of the Voices in Motion project concerned whether we could observe improvements in cognitive function by focusing on reducing other symptoms of dementia including depressive symptoms and signs, anxiety, and stress. Our preliminary findings support this possibility.

Episodic Memory. Memories of specific events and experiences are examples of episodic memory. Episodic memories are important because they allow you to recall details and personal experiences that are an important part of your life. Research findings from Voices in Motion suggest that the benefits of choir (improving quality of life and affect, reducing levels of agitation and distress) result in modest gains in memory function for persons living with dementia, with much larger gains observed for caregivers. How is this possible? Our findings suggest that the many benefits of social singing may result in reduced demands on brain function, which can then result in the use of these freed-up resources for demonstrating improvements in memory and cognition.

Global Cognition. One particular measure that we employ (the Mini Mental State Examination, or MMSE) measures various cognitive abilities including delayed memory, attention, language, visuospatial ability, and orientation in time and space – in this sense, it is considered a measure of global cognition. The MMSE is commonly administered to individuals living with dementia, and is often employed by clinicians to gauge progression of the disease. One of the novel features of the Voices in Motion study is the use of intensive longitudinal assessments – participants were tested approximately every month, with some individuals being assessed on up to 10 occasions over a 1.5-year period. Recent results show that, over the course of the entire study, rates of decline on the MMSE were lower than expected. The average participant with dementia in VIM declined about 1.3 units per year, compared to other non-intervention studies where rates of decline are 2-3 times faster. There was one fundamental distinction between the Voices in Motion study and the other investigations – the act of social singing and all of the benefits that this activity affords (developing community, engaging in activity with meaning and purpose, forming new friendships and support networks). These findings underscore the benefits of social singing for protecting against accelerated cognitive decline for persons with dementia.