By Andrea Warner  |  Board Member  |  Voices in Motion

Thien Tran, who has been part of the Voices in Motion Choir since its inception three years ago, has been awarded the first VIM bursary! At age 19, and now that he has graduated from high school, Thien will be moving to Calgary this fall to start studies at the University there to pursue a career in nursing. He is very grateful to have received this bursary which will help him with his many upcoming university expenses.

Thien was born in Vietnam in a small village near Ho Chi Minh City, moving to that larger city at age 2. Thien is pronounced ‘Thee-in” and means ‘kindness’ in Vietnamese. He certainly exemplifies that quality and many more along that line! At an early age he developed the desire to live in a different country and to learn a different language. He first went to Singapore but after some months decided to try Canada as his family had some connections here. He has been attending Pacific Christian School for the past three years and living with a homestay family, with which he has grown very close. This family has helped him adjustment to life here, as well as frequent and regular contact with family through the phone and internet. 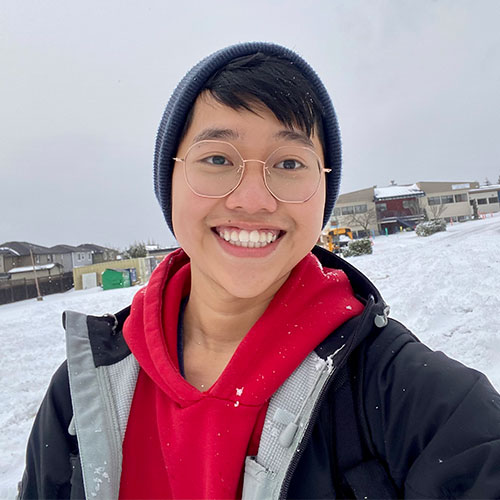 Thien has noticed many cultural differences between his native and adopted countries. As one example, explains that in Vietnam one normally eats with a spoon and bowl, but here he had to get used to using western cutlery and plates. He also mentioned that in Vietnam lunch is usually the biggest meal, whereas in Canada it is later in the day. Religious and other holidays are also different, citing Easter and Halloween as examples. While his knowledge of English was very basic before coming here, Thien has studied it extensively since arriving and is now completely fluent.

Thien was excited when he heard about the choir opportunity as it combined his love of singing with his enjoyment of volunteerism. He has greatly enjoyed getting to know the various choristers, learning about their histories as well as their struggles with dementia. Thien gives credit to his choir experience for helping him to develop a spirit of compassion, and he plans to apply this compassion in his future field of nursing. He is considering going into pediatrics, as he is really enjoying his summer employment as a children’s camp leader.

While greatly supported by his own family and his homestay family, Thien has had to develop a great deal of independence, which has given him the confidence to tackle new challenges. That strength, as well as his wonderful positive, open and friendly personality, will ensure a successful transition to university in Alberta. Luckily for us Canadians, Thien loves living in Canada and plans to stay here; and luckily for our choir members, Thien hopes to stay involved with the choir through the online version, his class schedule permitting.

We really enjoyed and benefitted from having Thien in our midst these last few years, and we wish this wonderful young man all the best in his future endeavours!