“Cooking with the Choir” Zooms into Life

By Andrea Warner   |  Board Member  |  Voices in Motion

On March 21 of this year, we enjoyed getting to know more about four of the Cooking with the Choir recipes, and the people and stories behind them. Rick conducted spotlight interviews with three couples about the story behind their recipes. We went back half a century to hear how Wendy and Ken got their family favourite ‘Shrimp and Cheese Appetizers’ from friends; we heard about a healthy and delicious side dish, ‘Cauliflower Rice,’ that Janet and Gary make frequently; and a two-ingredient dessert that goes back at least a generation that is still being made by Dinah and Barry, ‘Lemon Fool.’ I had the opportunity to ask each cook about possible ingredient substitutions and special tips for successful preparation. To tie in to the musical aspect of what connects us here, all these recipes can definitely be added to the ‘cooking canon’ of one’s household! 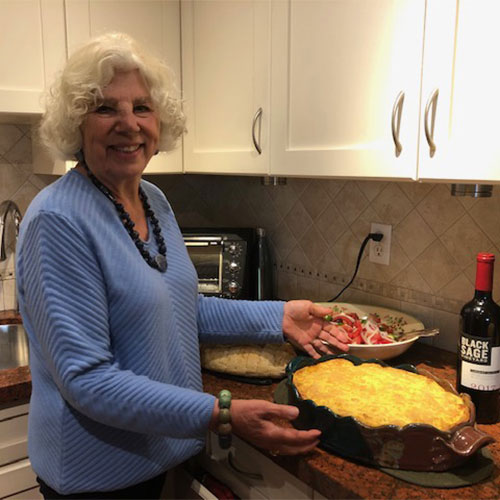 We then had the pleasure of a longer interview and demonstration at Niki’s home! Erica and Rick (with appropriate pandemic safety precautions) interviewed and videoed Niki about a recipe dear to her heart: the Greek dish ‘Moussaka,’ with a recipe handed down to her by her own father. Niki had already prepared the layered parts of the dish—meat sauce alternating with grilled vegetables—and we watched her do the magic creating the lovely, thick cream sauce which covered, and completed, the casserole. I would be amiss to not mention that Rick played a key role in these last steps of the recipe! And as if that wasn’t enough work, to create this work of culinary art, Niki then proceeded to pull out of her oven another Moussaka that she had popped in the oven an hour earlier! This was nice for Erica and Rick, who were able to taste-test the final results—and they confirmed that it was as good as it looked! It was delicious!
← Previous Blog Post Next Blog Post →